The Putting Board – NEW PRODUCT

The Putting Board is the most versatile training aid on the market. The ability to adjust the plane angle to fit your set up will allow you to train the proper path, face angle, lie, loft, stroke length, and proper acceleration at the same time.

The Putting Board comes with a shaft clip that helps you maintain face angle during the stroke and a speed board to help you with stroke length on putts of 4, 7, 10 and 13 feet.

Over 15 years ago, Luke Donald and his instructor Pat Goss started training with a makeshift putting plane board. Throughout his career, Pat understood the importance of moving the putter “on plane” to create a consistent and repeatable putting stroke. This preliminary putting board allowed Luke and other players to practice and ingrain an “on plane” stroke. This type of training has led Luke Donald to be statistically one of the best putters of the modern era.
Four years ago, Pat Goss and Sam McKenney, a peer instructor, decided to make a better version of this board to help all levels of golfers. It has taken them time to observe, research, and workshop this versatile training aid. Pat’s short-game teaching philosophy focuses on the idea of “neutrality” in putting. Keeping neutrality in mind, Pat & Sam aim to help players maintain the proper lie, loft, face angle, path, length, and acceleration during the stroke, and then repeat it over and over again.
Pat and Sam were able to design a training aid in which a player can train in all six of these areas.  No other putting aid has this ability.
Initially, Pat and Sam made a few putting boards to have for their own students and the Northwestern Men’s and Women’s teams. Players immediately saw the benefits of being able to train with it and requested to buy them. Such requests reaffirmed how helpful and versatile The Putting Board was and how critical it was to practice with it on a daily basis. Pat and Sam have seen players of all levels benefit from training on the The Putting Board from junior golfers to PGA Tour winners to the average weekend warrior.  Not wanting to rush the process, they took their time designing and testing the use of their product, insuring that final version maximized players’ results before releasing it to the market.
The Putting Board is incredibly easy to set up outdoors or indoors, and can be folded up in seconds for travel. Whether you are a professional golfer or a casual player, the Putting Board is an effective and useful training tool.

There are no reviews yet.

Only logged in customers who have purchased this product may leave a review. 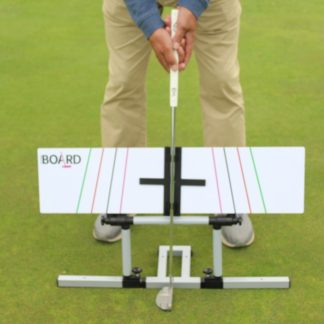